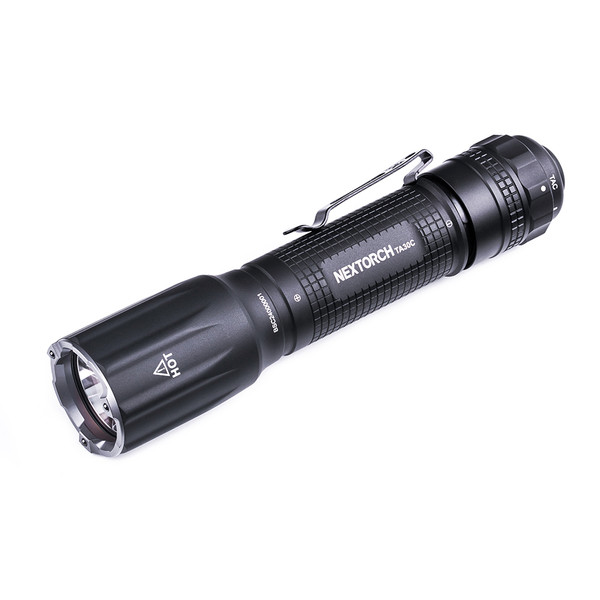 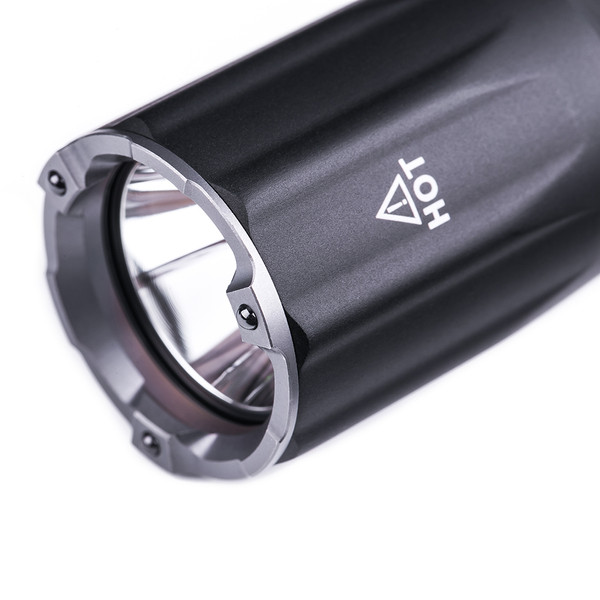 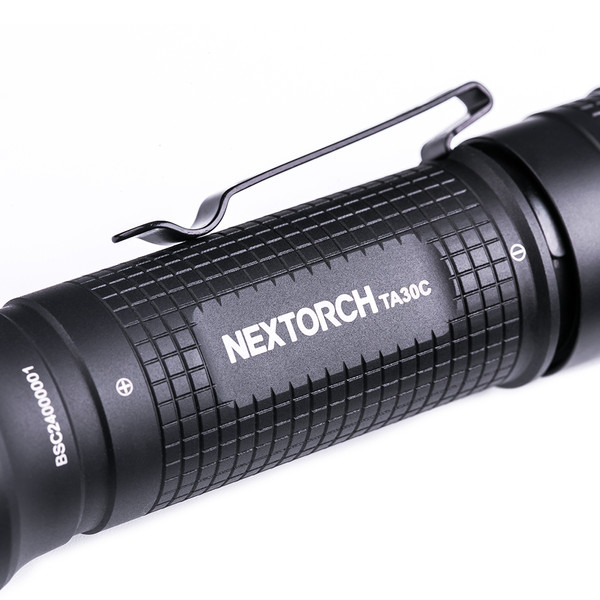 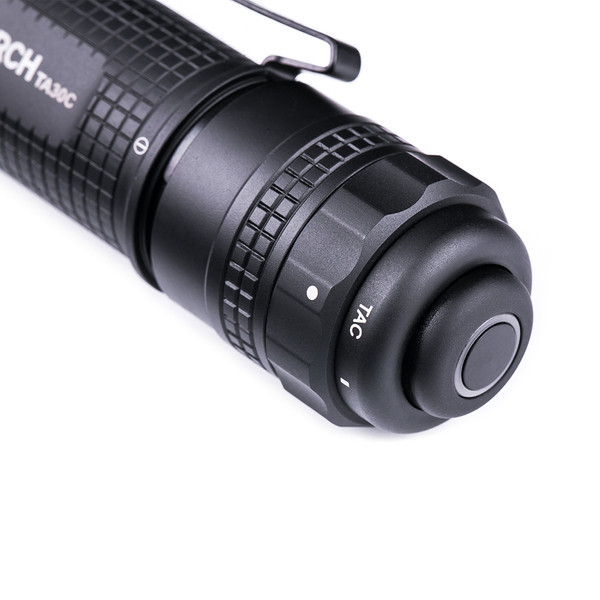 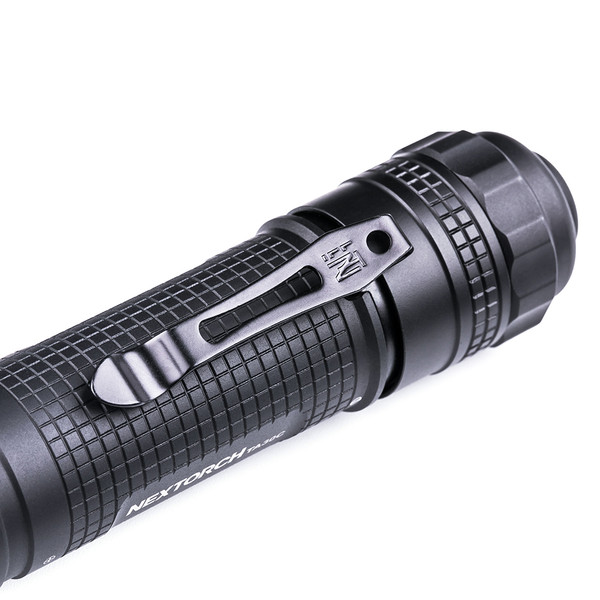 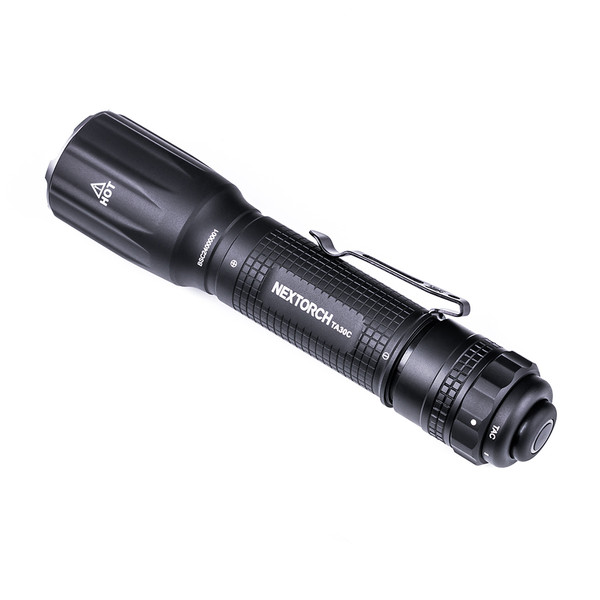 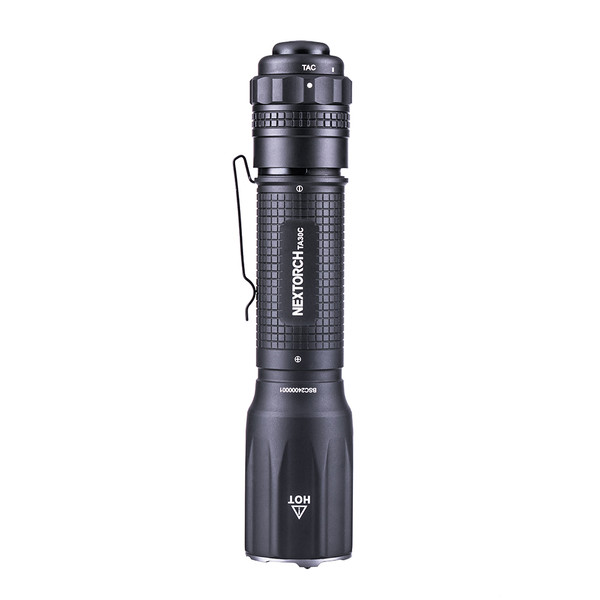 The NEXTORCH TA30 has become one of the most widely used tactical torches in the world thanks to its unique tactical superiority.
Experts from the police, armed forces and professional security services describe the TA30 as the only truly tactical torch.
The first generation TA30 already had an impressive 1,100 ANSI lumens, which was soon expanded to a more powerful 1,300 ANSI lumens thanks to new LEDs and technology.
This LED torch is a real global success.
Now NEXTORCH could have simply rested on this great success, but this does not suit this innovative company. NEXTORCH is continuously expanding its lead and is happy to pass it on to its users immediately. As a logical consequence, the new TA30C can now provide convincing safety in use.

What is new about the TA30C?

The most important feature has been retained in the new TA30C: the uncompromisingly simple and stress-proof operating concept with the patented ring switch and the instant light that only lights up as long as it is held down.
The instant strobe flash when the thumb is pressed down has also remained. For the continuous light function, the NEXTORCH TA30C has the ring switch, which makes it very easy to dim the light, e.g. to use it as a reading light for checking documents.

Instead of the 1,300 ANSI lumens, real, tested 1,600 ANSI lumens are now available. The runtime at the highest light level is a remarkable 2.5 hours. Dimmed to the lowest level, even 50 hours of light are possible with one battery charge.
As a new feature, the 18650 battery supplied now has a USB-C charging port, so charging is even faster and you don't need a special charger, a mobile phone charger, a power bank or the USB port in the car are sufficient.
An LED built into the battery informs you when the battery is fully charged. If there is no way to charge the TA30C's battery, two CR123 batteries can easily be used.

As a further novelty, a battery status indicator was added to the TA30C at the special request of many special units. Once again typical NEXTORCH: the development of this function took place exclusively in practice. When the ring switch of the new NEXTORCH TA30C is operated, a very faint blue glowing ring in the rear switch reliably informs about the battery status. The faint blue glow only lights up briefly after the ring switch has been operated.

The glass breakers at the front of the lens crown of the TA30, often copied by many torch manufacturers, have also remained, but here too a change has been made to meet the requirements of the emergency services: Instead of stainless steel polished to a high shine, which can lead to unwanted reflections and thus reconnaissance of the other side, the lens crown of the TA30C is now made of high-strength, grey titanium and permanently matt-finished. A sensible and valuable improvement.

The stroboscope function has also been optimised. Instead of only flashing at one frequency, the TA30C changes the flash frequency while it is activated. As many tests have impressively proven, the desired effect of disorientation on the opponent is strongly intensified by the changing flash frequency. This state in attackers occurs almost instantaneously, as the rapid succession of light and dark overwhelms the human brain. This is especially true for perpetrators who are under the influence of BTM and/or alcohol, as numerous incident reports prove.

Our website uses cookies. Some of them are essential, others help us improve this website and your user experience. You can find further information about our use of cookies and your rights as a user here:

Marketing cookies are used by third parties and publishers to display personalised advertisements by following users across websites.

Content by video platforms and social media platforms are blocked by default. If you accept cookies by external media, access to these contents requires no further consent.

These cookies are used to store preferred settings and certain options selected by the user (e.g. disabling language redirect).

Essential Cookies are required to enable key functions as well as the stable functionality of the website.